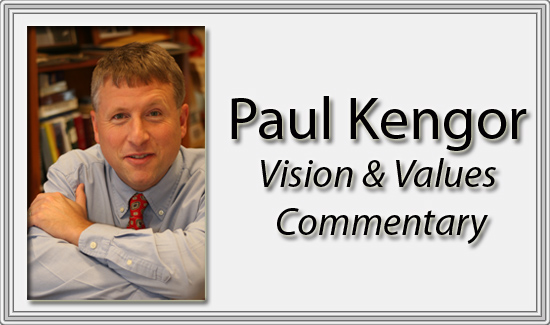 The image of the Cathedral of Notre Dame engulfed in flames will remain seared in memories, captured by the cataclysmic moment when the towering spire collapsed.

Fortunately, the fire proceeded slowly enough for people to get out—in fact, so slowly that I was surely one of countless millions watching and yelling in frustration: What are the French authorities doing? Can’t they stop this? Meanwhile, the flames encroached upon the relics, the artifacts, the windows, the paintings, the irreplaceable—upon what is believed to be the actual crown of thorns of Christ. On Holy Week no less.

It was a feeling of helplessness. And in that sense, it was a frustration similar to what many of us have felt toward the French authorities for a long time, as they’ve eagerly embraced secularism and rejected the very Christian patrimony represented by the Cathedral of Notre Dame. The burning cathedral, and the state’s seeming inability to stop the blaze, seemed a harsh symbol of France’s vanishing religious heritage.

Angela Merkel, one of the few European leaders unafraid of tradition, observed that Notre Dame is “a symbol of France and of our European culture.” It certainly is. Its erection was just that, as was its survival through centuries of struggles, as is its smoldering now.

Hilaire Belloc said that “the faith is Europe and Europe is the faith.” Well, the Christian faith is in worse shape in Europe than at any time since the first stones of Notre Dame were laid eight-and-a-half centuries ago. And in many respects, France has led the way in the aggressive secularization.

Recall a defining moment at the turn of this new century, when a battle raged within the European Union over whether to include a reference to God in the EU constitution.

The pope, suffering from advanced Parkinson’s, took up the fight with vigor. He made arguments akin to those of the American Founding Fathers: It is crucial for citizens to understand the ultimate source from which their rights derive: their rights come not from government but God. What God gives, government cannot take away.

The pope was countered by French president Jacques Chirac, who sniffed: “France is a lay state, and as such she does not have a habit of calling for insertions of a religious nature into constitutional texts.” The “lay character” of France’s government simply did “not allow” for a reference to God in a constitution.  The president of France spearheaded the continental revolt.

Chirac’s snooty dismissal was sadly symbolic. Again, Belloc: “the faith is Europe and Europe is the faith.” Well, the state of the faith in much of Europe is in flames.

That brings us back to the Cathedral of Notre Dame, Anno Domini 2019, the day after Palm Sunday. We do not yet know what caused this tragic episode, nor whether the authorities could have done a better job responding.

The Easter season is about hope. If there’s a particular hope for Europe this season, it’s that the Cathedral of Notre Dame will be resurrected. And yet, given the state of modern France, it’s hard to be hopeful about what will replace it.