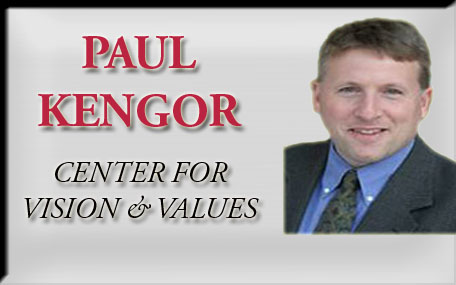 I published a piece recently on the reaction to President Trump’s condemnation of socialism in his State of the Union. He said something indisputably factual and indubitably obvious to most Americans: “Here, in the United States, we are alarmed by new calls to adopt socialism in our country. Tonight, we renew our resolve that America will never be a socialist country.”

It was a revealing moment not only for President Trump but also for the Democratic Party.

I noted that, to their credit, Democrat leaders Nancy Pelosi and Chuck Schumer applauded, as did a decent number of Democrats in that chamber. That was in contrast to the Democratic Party’s two socialist stalwarts, Bernie Sanders and Alexandria Ocasio-Cortez. Sanders was visibly agitated. Ocasio-Cortez did a better job concealing her displeasure, as she sat stone-faced.

But I’ve since learned something even more interesting among Democrat reactions. No less than Elizabeth Warren, about as left-wing as a Democrat senator can get, joined Schumer and Pelosi in applauding Trump’s condemnation of socialism. Yes, Elizabeth Warren. Better, whereas Pelosi offered mild applause from a seated position, Warren stood and clapped emphatically, as a sea of silent white-wearing congresswomen sat behind her unmoved.

I learned of Warren’s surprising reaction from the communist press, namely from People’s World, successor to the Daily Worker, in a headline that mocked, “A Specter is haunting Donald Trump—the specter of socialism.” So disappointed were the comrades at People’s World that they scorned Warren as an “erstwhile progressive leader.”

Beyond that Democratic Party split in that chamber, however, are the further fissures that have subsequently opened among the wider left’s pontificators. Veteran columnist E. J. Dionne fired off a piece for the Washington Post (reprinted as the lead at RealClearPolitics) with the defiant title, “Trump’s War on Socialism Will Fail.” “He wants to tar all Democrats as ‘socialists,’” insisted Dionne, “and then define socialism as antithetical to American values.”

That was a curious protest from Dionne. In truth, not only had Donald Trump said nothing in the speech suggesting let alone tarring all Democrats as socialists, but to claim he launched a “war on socialism” seems a little overheated for a mere two lines in a 5,500-word speech—two lines that should have been viewed as utterly uncontroversial. Even if Trump had said part of what Dionne said, who can argue that socialism isn’t antithetical to American values? Of course, it is.

But perhaps the most revealing reaction among the citadels of liberalism was a New York Times article titled, “Painting Socialists as Villains, Trump Refreshes a Blueprint.”

It began with a slap not at socialists in liberal ranks but at the Republican villain in the White House:

President Trump has proved himself adroit at creating villains to serve as his political foils. In his State of the Union address on Tuesday, he introduced a new one: socialists….

[It] could provide Mr. Trump with a potentially effective weapon in confronting an increasingly aggressive and more liberal Democratic Party, defining it through attacks on Senator Bernie Sanders of Vermont and Representative Alexandria Ocasio-Cortez of New York, who describe themselves as democratic socialists, and other members of the party pushing progressive policies like a 70 percent tax rate and “Medicare for all.”

The president’s economic advisers began sounding the socialist alarm in the fall in a 72-page report criticizing what it described as the socialist ideas of leading Democrats…. The word “socialism” appeared 144 times—on average, twice a page…. Yet there is no evidence of any growing public angst about socialism sweeping the United States.

Really, New York Times? Actually, there’s angst in the Democratic Party about it. And where there isn’t angst, there’s acceptance, thus creating further angst. The Times piece, ironically, proceeded to show just that, even quoting a conservative analyst, Greg Mueller, rightly noting of Sanders, Ocasio-Cortez, and fellow socialists: “They want to take the country toward socialism and their party is divided on that and there is a major fight in their party over whether to be a socialist party.” The Times then begrudgingly gave statistics illustrating the support for socialism among Democrats:

[A] Gallup poll in August showed that Democrats had a more positive view of socialism than they do of capitalism, 57 percent to 47 percent. Their view has been relatively stable since 2010, but attitudes toward capitalism have become more negative….

Among Americans ages 18 to 29, the Gallup poll found, 51 percent were positive about socialism while 45 percent viewed capitalism favorably. Gallup noted there was a marked, 12-point decline in younger adults views on capitalism is just two years.

“Every single policy proposal that we have adopted and presented to the American people has been overwhelmingly popular,” Ms. Ocasio-Cortez told MSNBC late Tuesday.

Precisely, that’s the point. And yet, the Times concluded not by affirming the obvious, as proven by its own data, but by taking a shot at Donald Trump as bad boy in the whole socialist schema: “It was no accident that Mr. Trump chose to introduce the socialist menace in perhaps the highest-profile setting available to a president as the first step in trying to paint Democrats as too far left, just as they start to engage in a presidential nominating process that will shape the party’s image.”

The Times wants to energize its readers by convincing them to think Donald Trump is morphing into Joe McCarthy. A new Red scare in Washington. One would think that Trump had called for a resurrection of the House Committee on Un-American Activities in his State of the Union.

Trump’s denunciation could not have been more well-deserved. Bernie Sanders, of course, got 13 million votes in the Democratic Primary in 2016 (that’s 40 percent of all Democrat votes) and is effectively the frontrunner for 2020. He is a lifetime socialist, a onetime formal presidential elector for the Socialist Workers Party. Alexandria Ocasio-Cortez is an actual formal member of the Democratic Socialists of America, which, its website boasts, is “the largest socialist organization in the United States,” with 40,000-plus members. Numerous DSA members were elected all over the country on the Democratic Party ticket in 2016. The DSA claims chapters on 217 college campuses. The Democrats can’t wait until Ocasio-Cortez is age-eligible to run for president. Tom Perez, chair of the DNC, says that this young socialist “represents the future of our party.”

Poll after poll after poll show that Millennials prefer socialism over capitalism. One poll prior to 2016 showed that 69% of Millennials said they would vote for a socialist as president. Many did just that with Bernie.

If Donald Trump denouncing socialism was such an outrageous thing, then the New York Times should pause to explain why even Nancy Pelosi and Chuck Schumer and Elizabeth Warren applauded.

This is a legitimate threat. What liberal organs like the Times ought to be doing is producing articles warning Democrats not to veer too far left. Why don’t they ever criticize their own? We conservatives criticize our own all the time, including President Trump. Liberals prefer to denounce conservatives for denouncing socialism.

The better question is why the New York Times and many other “progressives” aren’t likewise alarmed by this trend in their ranks.

—Dr. Paul Kengor is professor of political science and executive director of The Center for Vision & Values at Grove City College. His latest book (April 2017) is A Pope and a President: John Paul II, Ronald Reagan, and the Extraordinary Untold Story of the 20th Century. He is also the author of 11 Principles of a Reagan Conservative.