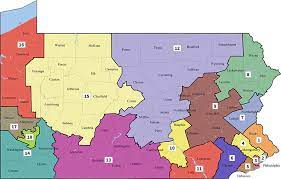 Residents Can Register to Testify on Congressional Redistricting at PARedistricting.com, Grove Says

HARRISBURG – The House State Government Committee wants to hear from residents as it prepares to take its congressional redistricting hearings on the road, Rep. Seth Grove (R-York), the committee’s chairman, said.

“Receiving input from residents is vital to ensuring the congressional redistricting process is as transparent as possible,” Grove said. “Members of the House State Government Committee and I will be making stops throughout Commonwealth so that we receive a wide swath of input. We need residents to be active in the process.”

Residents wanting to provide in-person testimony at one of the committee’s eight hearings being held across the state should go to www.PaRedistricting.com to sign up. Residents can also provide written testimony that will be taken into consideration by the committee. To access the registration and submission pages, click on the “hearings” tab on the homepage of www.PaRedistricting.com. From there, users should click on the hearing at which they want to provide testimony.

The hearings started in Harrisburg in July with an overview of the redistricting process followed by receiving testimony from stakeholders. The hearings continue on Aug. 24 with a hearing at Grove City College at 9 a.m., followed by a hearing at the Hampton Inn Pittsburgh-Bridgeville in Allegheny County at 9 a.m. on Aug. 25 and then a hearing at Laurel Highlands Middle School in Uniontown, Fayette County, at 9 a.m. on Aug. 26. Future hearings will be held in the eastern part of Pennsylvania, including one of Philadelphia, in September and wrap up with hearings in the central section of the state in October.

Earlier this week, Grove announced another opportunity for Pennsylvania residents to take part in the congressional redistricting process. They can submit the boundaries of their communities of interest and comment on the current congressional district map using online mapping tools now available at www.PaRedistricting.com.

Information collected through the U.S. Census every 10 years determines the number of U.S. Representatives each state is entitled based on population. Once in receipt of that data, states are responsible for redrawing the geographic area of their congressional districts to ensure equal and fair representation, and the physical manifestation of the constitutional principle, “one person, one vote.” This process is commonly referred to as redistricting.