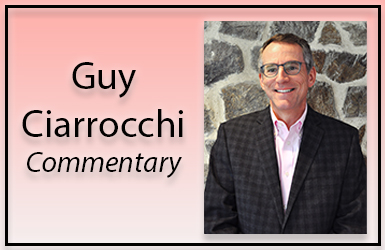 Getting rid of the Senate filibuster would harm the economy in the short-term and do serious damage in the long-term. This is based on not only my outlook as CEO of the Chester County Chamber, but on one of my first conversations with a business CEO—in 1994. He explained to me that the only thing business owners feared more than higher taxes was unpredictable rates.

The U.S. Senate has 100 members. In order for a bill to be brought to a vote in the Senate, 60 members have to agree to have that vote, as opposed to simply requiring a bare majority of 51. But for a few brief periods in history, getting to 60 votes requires some degree of consensus amongst members of both parties. This is generally a good thing, part of the reason that we have a Senate.

Today, the Senate is split amongst the parties 50-50, but with Vice President Harris’ tie-breaking vote, the Democratic Party has effective majority rule. This majority is considering ending the filibuster so that they may enact President Biden’s and the Democrat’s agenda, regardless of the votes or input of Republican members.

To Chambers and many business executives, this is not about the political parties or even about the relative merits or weaknesses of any of President Biden’s policies or legislation—for example most support an infrastructure bill. This is much more important: This is about the path of legislation, the need for consensus, and the ability to plan for our economy to grow.

Nearly 30 years ago, that CEO taught me that business owners, executives and entrepreneurs trying to start a business need predictability, and so do investors. Yes, most managers or owners prefer low tax rates and limited regulations. But what they really need is predictability. They need to be able to determine the cost of operations, compliance and payroll, looking at matters five, 10, 50 years down the road to assess the situation.

Having the filibuster forces consensus, forces collaboration, but, most of all, it prevents legislation by whim. The House often acts quickly, pushing through its party’s current ideology, platform, or “hot take” on an issue. That’s its historical role. The Senate was designed to be more thoughtful, to invite discussion and encourage dialogue—to find consensus.

Yes, when any of us feels strongly about an issue, it’s frustrating. But the end result is that a bill that is supported by 60 Senators—or at least is not deeply opposed by more than 40 of the 100—probably reflects some consensus. And importantly, if it becomes law, it may stay the law for a period of time. This promotes consistency and allows business owners, bankers and entrepreneurs to know the costs and risks of hiring, growing or expanding.

Especially in today’s hyper-charged political world, when both parties have many members with deeply held, often diametrically opposed views and at a time when party control of the Senate changes frequently, removing the filibuster could cause chaos. At a minimum, it will cause uncertainty.

While the passage of those hypothetical bills might bring momentary cheers from each party’s base, it brings uncertainty to those who have to decide on important, life-altering, community-changing business decisions. Do we keep the factory in Coatesville open, or close it? Do we expand our plant onto the adjacent parcel of land, or not?

Most executives having to make decisions will opt not to grow or expand, even when it appears that a new law might favor it. Companies may drag their feet to comply with new regulations, figuring they can wait months until the new majority repeals them.

The filibuster can be frustrating and it may occasionally stop or delay good things. But the delays often bring the issue to the nation’s attention and when true, broad-based national consensus arises, the Senate acts; or, members of the stalling party pay the price at the next election.

While imperfect, the filibuster ensures that legislation will be passed with consensus, reflects a clear majority, and is likely to be the law for some time.

This allows entrepreneurs, managers, and investors to make bold decisions with their eyes wide-open and allows our economy to grow, based on that stability and predictability—which should be important for every household in every community, red or blue.

Guy Ciarrocchi is the CEO of the Chester County Chamber of Business & Industry, and a regular contributor to Broad & Liberty.