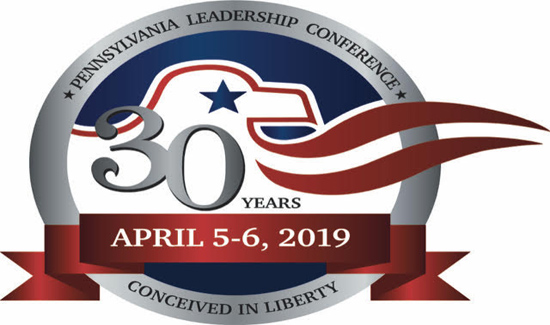 (Harrisburg, PA) – Tim Goeglein, Vice President at Focus on the Family and a Senior Fellow at the Heritage Foundation will speak at the 2019 Pennsylvania Leadership Conference.   The 30th anniversary PLC will be held April 5-6, 2019 at the Radisson Penn Harris Convention Center in Camp Hill (Harrisburg), PA.

Kimberley Strassel of the Wall Street Journal, and author of the best-selling book The Intimidation Game: How the Left is Silencing Free Speech will be the featured dinner speaker. Jimmy Kemp of the Jack Kemp Foundation; Mark Janus, Plaintiff in the landmark U.S. Supreme Court Janus v AFSCME decision, Kay Coles James of the Heritage Foundation, and Salena Zito of the New York Post and Washington Examiner will also address the conference.

Additional speakers and panel topics will announced over the coming weeks.

The Pennsylvania Leadership Conference is the premiere gathering of public policy conservatives each year in the Keystone State.  It is the largest and longest-running of the state-based conservative conferences regularly attracting a long list of conservative elected officials, scholars, journalists and activists for two days of speeches, panel presentations, workshops and networking.

Registration for the conference is now open at www.paleadershipconference.org. Enter promo code EarlyBird for a discount!

Tim Goeglein champions God’s welcomed role in the public square. His years of public service and private initiative have been devoted to faith, freedom, and family.

Tim is Vice President for External Relations at Focus on the Family and a Senior Fellow at The Heritage Foundation in Washington. He served in high-level government posts for the past two decades.  He worked as Special Assistant to President George W. Bush, where he was the Deputy Director of the White House Office of Public Liaison from 2001 to 2008.  He was the President’s principal outreach contact for conservatives, think tanks, veteran’s groups, faith-based groups, and some of America’s leading cultural organizations.  He was a member of the President’s original 2000 campaign and White House staff, serving for nearly 8 years.

Goeglein is the author of the evocative political memoir THE MAN IN THE MIDDLE:  FAITH AND POLITICS IN THE GEORGE W. BUSH ERA which was published in September, 2011.  The book has garnered national attention, and was featured on NPR’s All Things Considered.

From 1988 through 1998, Tim was first the Deputy Press Secretary, followed by Press Secretary and Communications Director for U.S. Senator Dan Coats of Indiana (who was in the Senate for a decade).  Between his time with the Senate and Bush campaign, Tim served as Communications Director for Gary Bauer at the Campaign for Working Families and in the Bauer presidential bid.

Tim was an intern for then- U.S. Senator Dan Quayle in 1985, and for then-Representative Dan Coats and for NBC News in 1986 during his college years at Indiana University’s Ernie Pyle School of Journalism. When he graduated in 1986, he was the Richard Gray Fellow in his senior year.

Tim’s first job upon graduation was as a television news producer for the NBC affiliate in his hometown of Fort Wayne, Indiana.  During high school and college, he produced a show for WOWO Radio, then owned by the Westinghouse Broadcasting Corporation.  The program was heard in 28 states.

Tim serves on the Sanctity of Life Commission for his church body, the 2.5 million- member Lutheran Church-Missouri Synod, and has served as a deacon in his church for 25 years.  His hobbies include reading, tennis, swimming, biking, and the fine arts.  He has been married to Jenny for 27 years; they have two sons Tim and Paul; and they live in the Washington metropolitan area.

Registration for the conference is now open at www.paleadershipconference.org. Enter promo code EarlyBird for a discount!