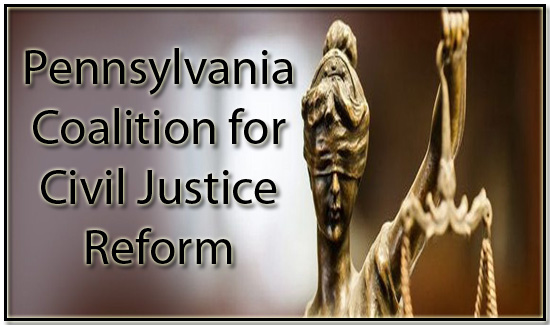 HARRISBURG – The Pennsylvania Coalition for Civil Justice Reform warned that a recently released actuarial report shows that the Commonwealth could be headed towards another healthcare crisis if a proposed change to the state’s medical liability venue rule is implemented.  The report, which was commissioned by Chairwoman Lisa Baker for the Senate Judiciary Committee, was completed by Oliver Wyman Actuarial Consulting, Inc.

“We applaud Chairwoman Baker for her efforts to obtain an independent report that quantifies the negative impacts that would be felt throughout the Commonwealth if the Supreme Court rolls back the clock and once again allows forum shopping in medical liability cases,” Pennsylvania Coalition for Civil Justice Reform Executive Director Curt Schroder said.  “For nearly two decades, the current venue rule has brought fairness and balance to the state’s civil justice system and helped to bring stability to Pennsylvania’s health care sector.  We can’t afford to go back to the days of rampant venue shopping, when access to health care suffered as a result of plaintiffs’ attorneys looking for jackpot verdicts.”

In 2003, as the state faced a growing health care crisis, a court rule prohibiting venue shopping in medical liability cases in the Commonwealth was implemented.  Prior to this rule, plaintiffs’ attorneys regularly funneled medical liability lawsuits to high verdict jurisdictions, such as Philadelphia, in search of large payouts.  This led to skyrocketing liability premiums for healthcare professionals causing physicians to drop high risk but necessary procedures, maternity wards to close, and patient access to health care to be limited.

Over the past several years, there has been an ongoing push by plaintiffs’ attorneys to return to the pre-2003 venue rules.  With the state Supreme Court poised to consider reverting to the former venue rule and once again allowing forum shopping in the Commonwealth, Senate Judiciary Committee Chair Lisa Baker commissioned an actuarial analysis to show the true impact of reversing the rule.  The independent reported found a rule reversal would lead to an average of a 3.1 – 4.7 percent increase in premium rates for hospitals and a 4.9 – 7.2 percent hike in liability premiums for physicians across the Commonwealth.  However, some counties would be much harder hit.  Lancaster County, for example, could expect upwards of a 73 percent premium increase for hospitals and an 82 percent liability premium increase for physicians. Other counties that would see substantial premium increases include: Bedford, Chester, Clinton, Cumberland, Lehigh, Lycoming, Monroe, Montgomery, Montour, Potter, Somerset, Susquehanna, Tioga, Venango and York.  According to the study, an increase in professional liability premiums would lead to a decrease in the accessibility of healthcare services and would have a significant impact on the cost of medical care in the state.

“We thank Chairwoman Baker for her steadfast leadership on this issue,” Schroder added.  “This report makes clear that a return to forum shopping would be a disaster for Pennsylvania patients, physicians, and hospitals. A constitutional amendment such as created in H.B. 2660 sponsored by Rep. Rob Kauffman is the only way to protect the current venue rule and prevent a return to harmful venue shopping. Giving the legislature authority to set venue policy will provide a meaningful check on the otherwise unlimited authority of the Supreme Court in this area.”

The Pennsylvania Coalition for Civil Justice Reform is a 501(c )(6), not-for-profit, nonpartisan advocacy organization comprised of a diverse group of organizations and individuals committed to bringing fairness to Pennsylvania’s courts by raising awareness of civil justice issues and advocating for legal reform. Additional information is available at http://www.paforciviljusticereform.org, https://www.facebook.com/paciviljustice/ or  https://twitter.com/paciviljustice.